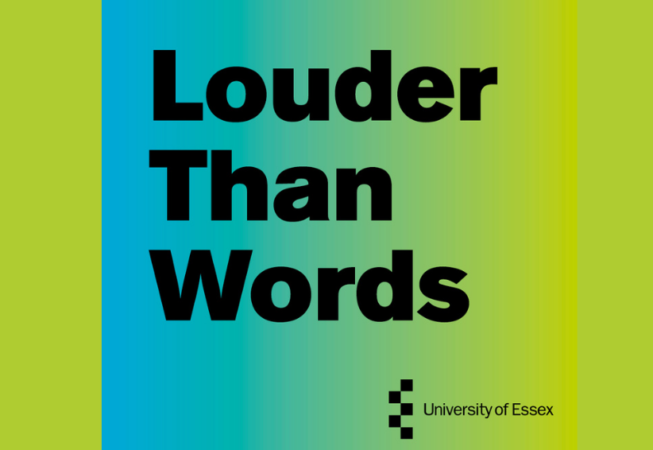 The CommsConsult team have long been avid fans of podcasts and this week saw the launch of our first podcast production for a new client. Commissioned by the University of Essex, Louder than Words is an exciting – and we think rather brilliant – podcast that takes on the issues ordinary people are thinking and care about, drawing inspiration from the work of the university’s academics and global partners.

Mark Twain said: “Action speaks louder than words but not nearly as often”. The podcast is a neat marriage of both, using voice to describe men and women who are taking action in their professional and personal lives on things they believe are important.

Jules Pretty, Director of the Centre for Public and Policy Engagement (CPPE) and Martha Dixon, journalist and CommsConsult Associate co-host each episode. Together they introduce and interview a diverse range of academics, practitioners and ordinary people who are ‘doing things’ about issues they care about.  The first episode takes on the hot topic of climate change. Guests include TEDTALK speaker and environmental campaigner Andri Snaer Magnasson speaking from Iceland’s Okjokull glacier, and Tanya Steele, CEO of the UK’s World Wide Fund for Nature’s (WWF), emphasising the importance of science in making decisions and generating new ideas.

Martha got to the heart of the beauty of this form of audio when she said: “A podcast can uncover so much in a short space of time.” An experienced BBC film and radio journalist, Martha had to innovate to overcome the constraints of lockdown which meant she managed the entire first season from her home in Falmouth.

I have been so inspired by my guests who take me and the listener on a fascinating journey to find the solutions to the big issues of our day – from climate change to inequality.  We have been transported to a glacier in Iceland and deep under the Arctic through the power of sound, as well as learning from the experts about how nature therapy can transform lives.

BUT the podcast market is a busy and noisy one. There are an estimated two million podcasts in existence and more than a quarter of a million were launched in 2020 alone. That’s a very busy marketplace: why add to the noise?  The mere thought of adding one more podcast to the estimated 48 million episodes is enough to make you think: “What do I have to say?”

Good! That’s the right thing to think before communicating anything to anyone (in our humble opinion!). As with all communication interventions, the important thing is to identify who is your target audience; what you want to communicate; why you think they’d be interested; and then to believe 100% in the quality and integrity of the product you put out there.

We think Louder than Words got it about right.

We had such fun with the project and look forward to developing  Season Two with the team at CPPE. It has inspired us to use the steep learning curve as a stepping stone to produce our own podcast on the role of communication in international development. This will launch as part of the Research to Action platform later this year – sign up here if you want to be the first to hear about the launch and look out for news of the first episode on social media using #R2APodcast!