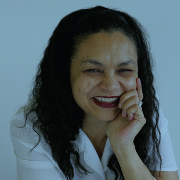 Paula Fray has worked in media for more than two decades. The former regional director for Inter Press Service (IPS) Africa, Fray is the managing director of frayintermedia a pan-African media training organisation focused on training reporters, media leaders and development communicators. She has trained journalists throughout Africa.

An award-winning journalist who rose to become the first female editor of the Saturday Star newspaper, Paula was also executive news editor of The Star newspaper in Johannesburg. She has wide-ranging consultancy and project-management experience and has served as a mentor for organisations such as Health-e and the Media Development and Diversity Agency (MDDA). She currently mentors senior media and development communication leaders.

In 2011, Fray presented social media for advocacy at the annual CIVICUS world Assembly where she was also the final speaker to review online discussions at the Assembly. She has reviewed social media strategy for various organisations including the Southern African Development Community (SADC). She advises several organisations on their advocacy strategies.

Fray graduated with a B Journ degree from Rhodes University and has a Woman and Law Certificate from Unisa. She is a recipient of the prestigious Nieman Fellowship at Harvard University.